Respiratory Syncytial Virus (RSV), also referred to as RSV bronchiolitis, is a common respiratory virus that can affect all ages of people. In older children and adults, the virus causes mostly upper respiratory symptoms similar to that of the common cold. In infants and adults with underlying medical problems, it can cause a serious infection in the lungs.

RSV can affect persons of any age but is most common in infants between 2 and 8 months old, and most children have been infected at least once during the first 2 years of age. Infants can also be re-infected with the virus. Infants who are born prematurely or with chronic lung disease are at an increased risk of developing a more severe form of the illness. 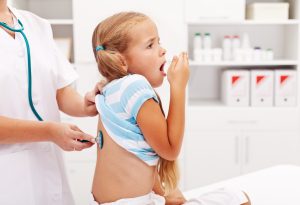 contaminated surface or objects. Infection can also occur when material containing the virus comes in contact with mucous membranes of the eyes, mouth, or nose, or by inhalation of droplets released from a sneeze or a cough. The incubation period (time from exposure to symptoms) is approximately four to six days.

The early stages of RSV in infants and children can often be mild, and present like a common cold. In children under the age of three, RSV can progress to the lower airways causing coughing and wheezing. Occasionally, the disease progresses to a severe form of respiratory disease requiring hospitalization with interventions to help the child breathe.

Signs and symptoms of respiratory syncytial virus depend on the severity of the disease. Mild disease present with:

Infants are usually the most affected by the disease. You may notice retractions (chest muscles and skin pulling inward with each breath, which is often a sign that your infant is struggling to breathe. Signs and symptoms of more severe RSV infection in an infant may include:

The respiratory syncytial virus is generally diagnosed by obtaining a complete history and physical, although a diagnosis can be difficult because the symptoms can resemble other infections. A test done by nasal swab or nasal wash of the child’s respiratory secretions may show the presence of the virus.

There are no medications used to treat the virus itself. The care of a child with RSV involves treating the effects of the virus on the respiratory system. Because the cause of the illness is viral, antibiotics are not useful. Treatment may include:

Synagis is recommended for the following children:

There is no vaccine available for RSV, but common-sense precautions can help prevent the spread of the virus. Use these precautions:

Call your child’s doctor if your child has any of these symptoms:

We don’t want to see your child in the emergency room, or even in your primary care provider’s office this winter with RSV. Although RSV can seem impossible to avoid, especially for families with children, it’s important for parents to know some steps they can take on their own to try and reduce their family’s risk of infection.